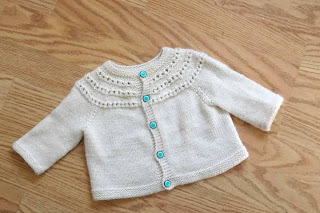 Continuing on with my list of really great free knitting patterns I used to prepare for Baby's arrival is the eyelet yoke cardigan. The eyelet yoke detail is lovely and might seem a little bit girly, but I think depending on your choice of yarn it could be appropriate for a baby boy, too. Since we didn't know whether Baby would be a boy or a girl, I opted to omit the eyelet details on the sleeves and lower border, and just used it on the yoke. This could be made even more masculine by using a nice navy or deep blue yarn, but I opted to use yarn already in my stash: a beautifully soft and warm alpaca yarn that my Mom had purchased for me while traveling in South America. The yarn, Indiecita DK, is truly lovely, though it does shed quite a bit. It leaves my black fleece looking a mess, but V doesn't seem to notice. (Rav details here) 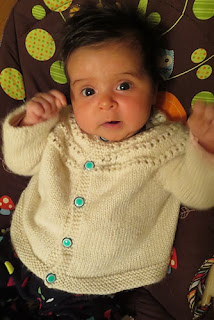 The pattern is written in great detail up to the point where you separate for the sleeves. After that, you have to have a good idea of what length you want to make the sleeves and the body, because little guidance is given with regards to either. I used the same sleeve and body length measurements I used for my puerperium cardigans. I probably should have made the body and sleeves just a touch longer, since the resulting sweater has the 3-6 month width, but is a little on the short side. Nevertheless, I love this cardigan, and will likely make it again as a baby gift.

Without a doubt, my favorite newborn sweater to knit and to put on V is puerperium. It is a great little cardigan, entirely seamless, which knits up in no time. I loved it so much, in fact, that I have made three so far (Ravelry details here, here, and here). These are so adorable on babies, and truly so easy to put on and take off of newborns. 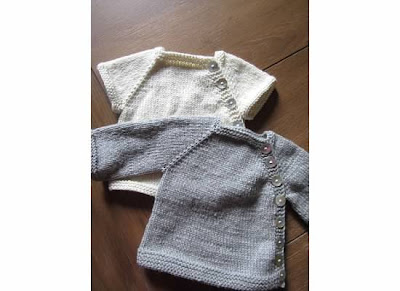 I used Superwash yarns for all three sweaters, knowing that I would probably not be doing a whole lot of hand washing those early weeks. The cream and pink sweaters were knit using Cascade 220 Superwash, which felt a little scratchy at first but softened up beautifully after blocking. The gray puerperium was knit using Knit Picks Swish DK. That, too, softened up quite nicely, but felted slightly upon machine washing. It's the first time I have a problem with Swish felting, but at least it was only a tiny bit and nothing to extreme. 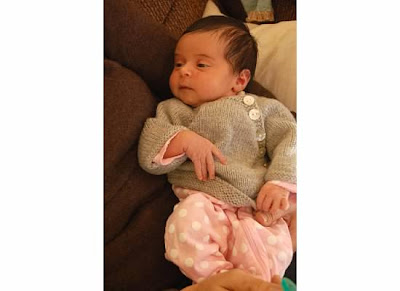 One thing I love about these sweaters is that they work equally well for a boy as they do for a girl. We didn't know we were having a girl, and so the first two sweaters I knit were done in gender-neutral colors: gray and cream. I also like that you could totally personalize the sweater by making it striped, adding an intarsia pattern, or even adding some texture to the body. And since they are so teeny tiny, you don't mind the stockinette body at all - by the time you are beginning to get bored of it, it's time to knit the bottom border and bind off!! 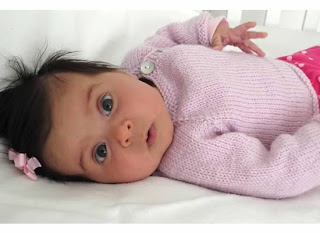 V just recently outgrew her pink puerperium, which I knit at a slightly looser gauge than the other two. By simply adding a little bit of length to the body and sleeves, she was able to wear this one from one and a half months to around 3 months, right after outgrowing the other two.
Posted by Lizzy at 11:35 AM No comments: 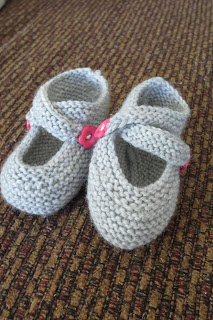 First up on the free baby patterns I love list: Saartje's Booties. This pattern is incredibly easy and these adorable little booties fly off the needles. I knit these up over a few days after V was born, but waited a while to seam up and add buttons. I know lots of knitters have an aversion to seaming (myself included), but these really are not that bad. Just in case it's a total deal breaker for you,
you can do a search on Ravelry -- I think I spotted a seamless version of this pattern on there. 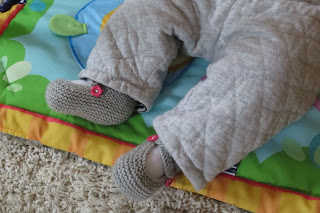 I would totally recommend making these booties - they are beyond adorable and easy to put on. Of course, that makes them easy to kick off, too, but I think modifying the placement of the straps would go a long way to remedying that. For my next pair (yes, I will knit another pair using thicker yarn and bigger needles, in hopes they will fit baby in the next three months), I think I will use a single ankle strap to keep these guys on. Hopefully that will do the trick. (Ravelry project notes here).
Posted by Lizzy at 7:30 AM No comments: 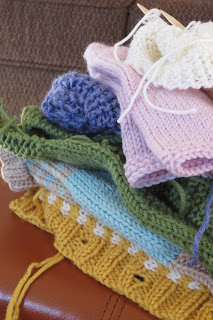 Before our baby girl arrived, I had this overwhelming urge to get ready for her arrival. Now, I know that traditionally, women who have this "nesting" instinct clean their home, cook meals to stock their freezer, and prepare the nursery. I did some of that, of course. But for me, nesting took the form of knitting. Yep, knitting.

Having had a summertime babe the first time around, I was a little worried about keeping our newest addition warm in late fall. So last summer, just as soon as the last box was unpacked and the house felt like it was moderately under control, I started on a list of gender neutral pieces I wanted to knit for our Fall baby. I didn't get to knit all of the items on my list, but enough to see this baby through her first two months in cozy handknits. Over the next few days, I'll share the wonderful (free!!) baby patterns I used for these handknits, in hopes you can use them and love them as much as I did.
Posted by Lizzy at 3:47 PM No comments:

I can hardly believe that it's now 2013. I know everyone says it, but, really, where did 2012 go? It was a very busy year for us, full of big decisions and changes for our little family.  The biggest bit of news is this: 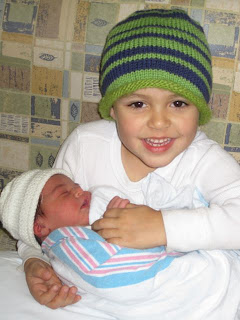 We welcomed the newest member of our family, a little girl, at the end of November. Big brother M is over the moon in love with her - and luckily the newness of it all hasn't faded for him. He continues to break into that big gorgeous smile any time he talks to her or even talks about her. I know it won't always be like this (I am a big sister myself, after all), so I will carry this picture in my mind and heart forever.

Little V is now 7 weeks old and has integrated into our family quite nicely. Mikey and I are still pretty tired and sleep deprived,but we are treasuring every moment -- as we are constantly reminded by M that it all goes by too quickly (I mean, just look at him! He's so big!).

I am starting 2013 feeling really fortunate with these two little munchkins and their Daddy in my life. Now I'm off to tackle that endless pile of laundry...
Posted by Lizzy at 3:18 PM No comments:

Email ThisBlogThis!Share to TwitterShare to FacebookShare to Pinterest
Labels: Life

A puppy for Ellie 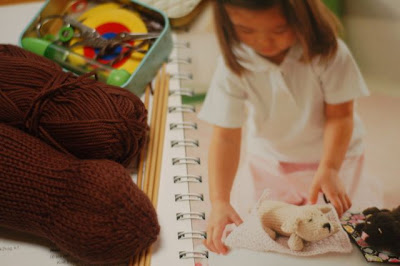 One of our little friends has a birthday coming up, so I dusted off my copy of Itty Bitty Toys and cast on for a little brown puppy this weekend. The pattern calls for a cotton wool that my LYS doesn't carry, so I chose Rowan Handknit for this project instead. I'd forgotten how much I dislike knitting with 100% cotton wool until now. I find it stiff and hard to make the increases, and my hands constantly ache from knitting. Thankfully it's a quick project and the bulk of it is done, so my hands won't be aching much longer.

As I flipped through the pages of the book, I was reminded about how much I like knitting toys and wonder why I don't do it more often. I'm thinking I need to cast on a few more toys for other special little people in our lives - after all, Easter is right around the corner!
Posted by Lizzy at 9:57 PM No comments:

Email ThisBlogThis!Share to TwitterShare to FacebookShare to Pinterest
Labels: Knitting

Not ready to say good-bye to cute

It seems as if though almost overnight my little guy has become a big boy. Complex, well-thought out sentences have replaced the short, choppy ones of just a year ago. His pronunciation has vastly improved, and gone are the days of guessing what he had just said. I no longer need to dress him, and he's such a good little helper. He spontaneously tells us that he loves us and compliments us on our clothes (so funny and terribly sweet).

But the most drastic change (or at least the most noticeable, since the other ones were gradual changes) is his new love for all things boy. 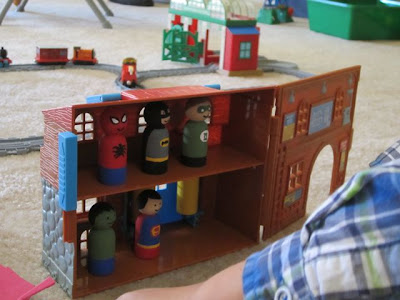 At not-nearly-4, I thought I had at least another year before he would discover that kind of play. I thought we had another year of trains, dinosaurs, wild animals, planets, and bugs. While he still enjoys all those things, it is super heros, ninjas, and Star Wars that have taken over the pretend play these days. I gather they were introduced by the older kids at his school, so his understanding of each is a little questionable (he keeps talking about Darn Vader.. heee!). But he knows there's good guys and bad guys, and at almost-4, that seems to be a fascinating concept. Last Christmas, while out shopping, I took a stroll down the super hero aisle at the toy store. I was not impressed - these action figures were too bulky, too angry looking, too grown up. 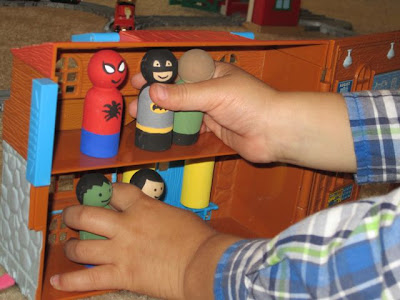 So I returned home, ordered some wood peg people from Etsy, and started planning. I dug up my cheap acrylic craft pain and started googling images of my favorite super heros. By the time the wood peg people arrived a couple of days later, I had a plan. It took me probably 4 hours to paint all 5 of these guys - the hardest part was waiting for them to dry. I love how cute they are, and I especially loved how happy my little guy looked when he unwrapped them at Christmastime. Since then, I've had to spray them with a sealant/varnish to keep the paint from getting damaged. It seems these super heros have a tendency of flying into each other. Or the wall. Or pretty much anything.

I love watching him play with these guys. I'm really not ready for big boy toys - and this lets me hold on to "cute" just a little bit longer.

Of course, he did ask for "a Spiderman with arms" for his birthday. Ahhh, well...
Posted by Lizzy at 8:58 AM 3 comments:

2010 Challenge: Use Your Craft Books